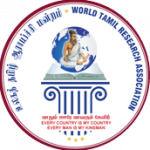 IATR was founded by late Rev. Xavier S. Thani Nayagam, the internationally known Tamil scholar in 1964 in New Delhi along with Dr. Jean Filliozat (France), Dr. Kamil V. Svelebil (Czechoslovakia), Dr. R. E. Asher (Scotland), Dr.T. Burrow and Dr. M. B. Emeneau (England), Dr. T. P. Meenakshisundaram, Dr. V.I. Subramaniam (India) and with other Tamil scholars from Europe and India who participated in the World Congress of Orientalists. IATR is a non- political and a not-for-profit organization. Its main goal is “to promote multi- disciplinary research on scientific lines in all aspects of Dravidian studies in general, and of Tamil studies in particular, and in allied fields with the active collaboration of international organizations and scholars interested in such studies.”
In 2016, the IATR organization was registered as “The World Tamil Research Association” in India to meet the legal requirements for registration in India.
Further, in July 2019, at the General Body Meeting of IATR held during the 10th Conference in Chicago, Dr. M. Ponnavaiko and Dr. E. Sundaramoorthy were elected as President and Vice-President along with other members of the Executive Committee. According to the Constitution, this Committee responsible for decisions of IATR always exists and operates from India.

Rev. Xavier S. Thani Nayagam, the former professor and the Head of the Department of Indian Studies at the University of Malaya in the 1960s, organized the first International Conference-Seminar on Tamil Studies in Kuala Lumpur, Malaysia, in 1966. The second conference was held in 1968 in Chennai, Tamil Nadu, under the leadership of Thiru. C.N. Annadurai, Chief Minister of Tamil Nadu. Subsequent conferences were held in Paris (1970), Jaffna (1974), Madurai (1981), Kuala Lumpur (1987, 2015), Port Louis (1989), Thanjavur (1995), and Chicago (2019). These Conferences have been consistent with the objectives of IATR and offered a forum for Tamil scholars worldwide to discuss their research on the Tamil language, literature, and civilization.

The office-bearers of IATR and many scholars felt that the Conference should give primary importance to research without any political interference. The well-known Scientist, poet, and Tamil scholar and the former vice-President of IATR, the late Dr. V. C. Kulandaiswamy, felt very strongly about a new way of organizing the IATR conferences. The 10th Conference conducted in 2019 in Chicago was organized along those lines jointly by the Federation of Tamil Sangams of North America (FeTNA) and the Chicago Tamil Sangam (CTS).
In continuation of that trend, Mr. S. Maniam of the “The Millennial Tamils” of Singapore has come forward and expressed their desire to hold a Conference in Singapore. They invited Dr. M. Ponnavaiko, President of IATR, and Dr. E. Sundaramoorthy, Vice-President of IATR, to conduct the 11th Conference in Singapore during June 16-18, 2023. Dr. Ponnvaiko and Dr. Sundaramoorthy graciously accepted the invitation and requested Mr. Maniam to start preparing for the Conference to be held in Singapore on June 16-18, 2023.
Further, Dr. Ponnavaiko, President of IATR, and Mr. Maniam, Chairman of “The Millennial Tamils,” have signed a Memorandum of Understanding “MoU,” broadly outlining the mutually accepted terms, expectations and roles, and responsibilities between the two parties for successfully conducting this 11th Conference.
Shortly, under the terms of the MoU, an Organizing Committee and an Academic Committee will be formed, each with specific roles and responsibilities as spelled out in the MoU for successfully conducting the Conference.

Consistent with the primary goal of IATR, the following will be the theme for this 11th conference:

The New Historicist Study to rewrite the history of the Tamils, Tamil Language, Literature, Culture and Civilization based on Tamil Classics and revaluations of early and recent excavations and other scientific evidences.

Research papers on selected topics will soon be solicited from Tamil scholars worldwide. For more details on the research topics and the procedure for submitting the abstracts and research papers, please visit the IATR website at http://icsts11.org.
We warmly welcome all to attend and participate to have a great Conference.
Anbudan